Before Truist was announced, BB&T-SunTrust regularly made the point that it was to be “A merger of equals”. So the first step would be to look for commonality between the names Branch Banking and Trust / Sun Trust. Then their lawyers would have told them they can’t trademark Trust, but if they added a single letter and constructed a name that wasn’t being used in finance, then legal would sign off on it. Hence Truist. That’s it, a day’s work, allowing for half a day of procrastination. But not even Interband can charge hundreds and hundreds of thousands of dollars for a half day’s work. So PowerPoints with gratuitous charts, de rigueur venns, arrows and bullets and triangles, bankerly stock photos, and inspirationally obfuscating consultant-speak were constructed. In the interest of due diligence, a full exploration and billable hours, alternative names were presented. Focused gropes ensued. Countless interviews of stakeholders were conducted, the results of which had no impact on the name, as the name was destined to be a variation on Trust before the process even began. Why? It’s the easiest sell to the internal audiences at the two banks:

“Both banks have Trust in their names, as do countless other banks, so we know it’s a banky word. And Trust is positive. And TRUiST preserves all of the letters, in order, of Trust. And it’s only one letter away from Trust”.

Sold, to the only audience this name needed to appeal to get paid, the internal audience. 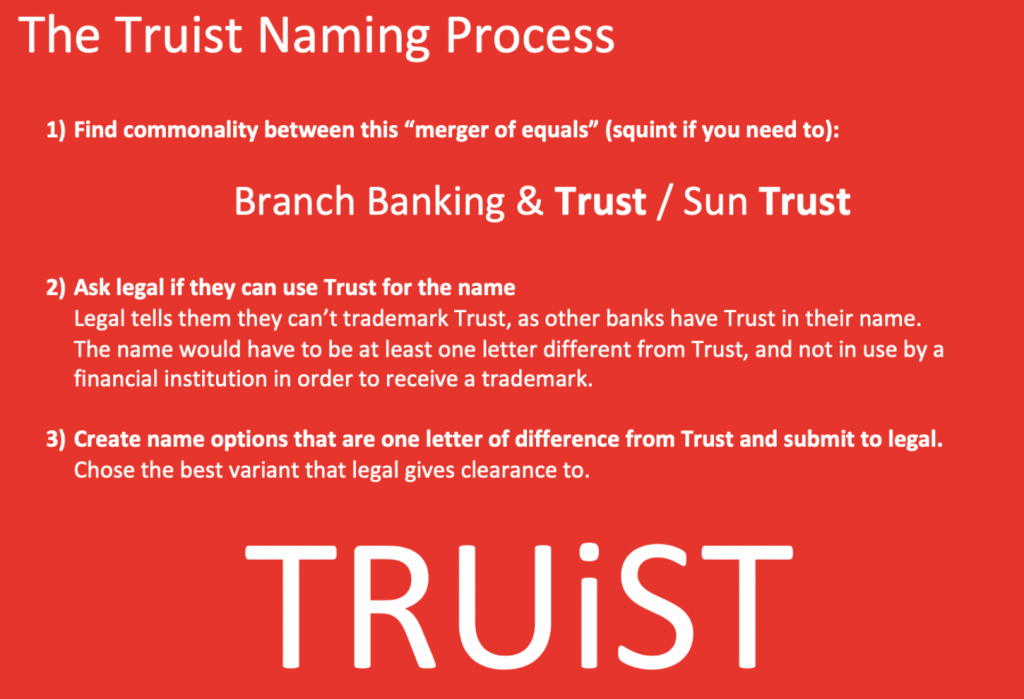 I don’t have inside information that backs up my above account, just 22 years of experience in naming.  But this is what happened, you can take it to the bank.